The history of street food

The history of street food 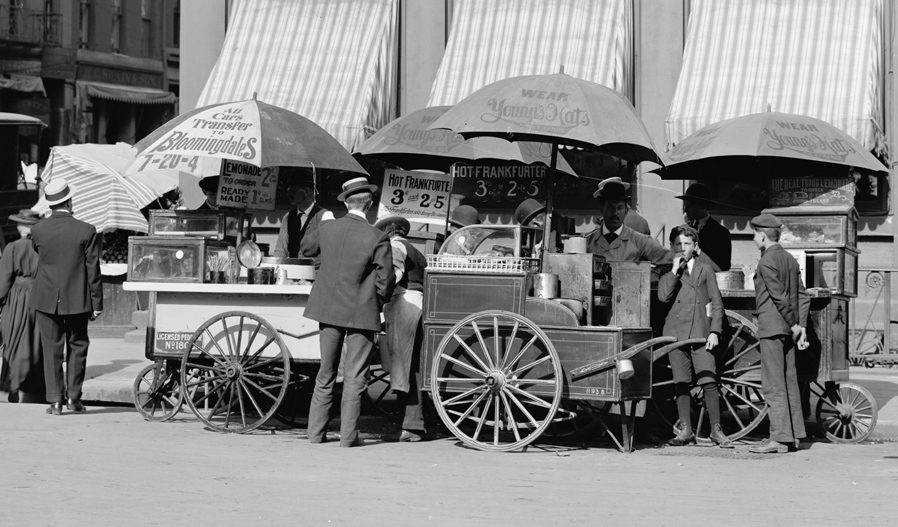 The proliferation of street food wagons in recent years may give the impression that street food is a modern phenomenon, but actually it has a long history. We’d like to take a brief trip back in time and then bring things up to date by looking at how street food is becoming a big part of today’s culture.

Street food wagons not only add to our enjoyment and variety of life but contribute significantly to the economy. In case you’re thinking of setting up in business with your own bespoke street food wagon, we have some tips on how to get started and what associated equipment you will need.

If we explore the history of any past civilisation we are likely to find references to street food. In Ancient Greece, for example, small fried fish were typical of the street food on offer, and in the excavated ruins of Pompeii archaeologists have found evidence of a thriving street food industry. For the Romans, chickpea soup seems to have been particularly popular, and during their occupation of Britain it seems that oysters were on the street food menu for even the poorest of citizens.

Moving to Victorian times, the appetites of expanding city populations were satisfied by a growing number of street food vendors – with an estimated 6,000 in London alone. A wide menu included tripe, pea soup, whelks, jellied eels and fried fish. Exactly when and where fried fish and chips were first sold together is a matter of debate, but from that combination’s origin in the 1800s it grew to become part of Britain’s staple street food diet.

Some of the British street food sold in the early part of the 20th century is still on sale here now, such as sandwiches, roast chestnuts and ice cream, but with the influx of immigration it started to gain the much more varied and international flavour that makes street food such a rich culinary experience in the present day.

The influential US-based National Restaurant Association’s annual ‘What’s Hot’ survey named street food wagons as a top trend in 2011, and 63% of chefs questioned still see street food as a hot trend in 2015. In fact, according to a global study by the Food and Agriculture Organisation in 2007, 2.5 billion people a day eat street food.

As our lives have become busier and our tastes more diverse, street food has turned into both a way of meeting our practical needs and a lifestyle choice. In many cases it has emerged as a tourist attraction. Certainly no visit to a new country or region is complete without experiencing the street food typical of its culture. Visitors to London, for example, can now choose from around 20 markets entirely devoted to street food.

Clearly there is a major business opportunity for those setting up street food wagons. Profits will vary, but a successful street food wagon might take in something like £1,000 a day. In any business plan you must consider that customers may dwindle to zero in bad weather, but on the other hand if you are lucky enough to be trading somewhere like Glastonbury on a good day your takings might rocket to £10,000.

In today’s competitive street food market it pays to make your wagon as well as your food stand out. Vintage vehicles such as Citroen HY vans, adapted into bespoke street food wagons, draw customer attention. Associated equipment should include attractive signage, ideally including your web, Facebook, Twitter and other social network addresses, as well as the necessary catering appliances.

Given that refrigeration and cooking are vital to most street food wagon businesses, another piece of associated equipment that’s a must is a back-up generator or some other form of reserve power supply.

Whether you will need a licence to trade from your street food wagon depends on which local authority area you are in and where you want to do business. Prime spots may well have to be bought at a high price from the existing holder. Authorities may charge a monthly licence fee and may designate areas in which trading from street food wagons is not allowed.

Some councils even require licensing of ice cream vans trading from the roadside in the traditional way, and in most areas it’s illegal to trade from lay-bys. The best thing is to look for licensing information on your local authority’s website and then make contact to discuss your specific plans.